Why Nazi is a bad word and other stuff

I apologize for the heavy nature of this post.  I have to get this off my chest.

I think I first started to be mindful of the way I treated and thought about people during my junior year of college.  I had to read a book penned by one of the sociology professors about how racist NIU students behaved.  The book is called 'Racetalk: Racism Hiding in Plain Sight' by Kristen A. Myers.  I will never forget it.  I made sure I never took any of her classes after reading it because I was convinced she hated college students.  I'm not kidding, the pages seemed to ooze judgment and seethe with hatred.

But the book was effective because most people were causally saying racist things without a second thought.   It doesn't end there.  People are classist, sexist, sizeist, misogynistic, ageist, and homophobic.  We can discriminate based on a person's nationality, religion, ethnicity, region, language, employment, diet, marital status and what kind of pop culture they like to consume.

People don't like to talk about it because it's awkward, depressing and it makes them feel bad.  I have been told to lighten up and not take everything so seriously by many people.  But I won't.  This kind of thing is important and it doesn't get discussed enough.

It's easy to see bad behavior in other people but a lot harder to see it in yourself.  After reading the book I thought about all the things I had said and my friends had said that were probably really, really offensive.  I stopped using the word 'gay' to describe things I didn't like.  I got on the long road to trying to become a better person one lost discriminatory epithet at a time.  I'm still nowhere near where I'd like to be.  I took a sociological survey a few months ago that let me know I have moderately negative views towards obese people.  At first I refused to believe it but lately I'm starting to notice some things that make me think, yeah that survey is probably right.  I need to work on that.

Living in Germany has helped me with my goals to stop acting like a jerk.  I still remember one of my first trips to Dresden, sitting in a bar with a bunch of expats, I causally used the word 'Nazi'.  Everyone freaked out.  One guy said to me in pig Latin 'ixnay azinay!'  And then because they were stand up guys they explained to me how in Germany it is a bad word.  A word that stereotyped, a caricature, synonymous with saying that all Germans are bad people.  Something clicked into place.  I started wondering how Germans felt when they watched Indiana Jones movies.  How did it feel to be the 'bad guys'?  How did that make little German kids feel?  Probably not very good.  Would I want my daughter to watch something like that?  No, of course not.  Since then I  have seen a lot of offensive stereotypes of Germans on tv.  So far my favorite is that they are nudists with horrible accents.  Funny?  Maybe.  Offensive?  Very.  For the record very few Germans have thick German accents.  They learn foreign languages in school and tend to speak them well.   And the nudist thing, well it's mostly a gross exaggeration.  They're just less uptight about bodies and that's a good thing.

I can't begin to tell you how many tv shows, music, movies are pretty much ruined for me.  Remember that episode of Seinfeld with the Soup Nazi?  I would never be able to watch that now.  I'd feel compelled to turn off the tv.  And don't even get me started on all the racist stuff on 'Two Broke Girls' or my Facebook news feed.  Facebook is the worst.  Yikes.  Some days it's depressing salad with animal cruelty dressing.   You know who you are people posting pictures of abused animals!

So anyway, I'm on this personal crusade to turn into someone who has empathy for people different from myself.   I'm trying to cultivate respect for my fellow human, for their beliefs and values.  In doing this I have made myself sensitive to other people's discrimination.  To the point where I don't want to hang out with women who body snark or read men's misogynistic comments on Facebook.   If someone makes fun of a religion or sexual orientation or mocks a culture I can't have it.  Because it rubs off and if it rubs off on me it's going to rub off on my daughter.   I don't want my kid to spend her whole life trying to stamp out these bad things.  I want her to have a better start than I did.

On the other hand I'm 100% fine with the word 'fuck'.  As far as I can tell that word doesn't hurt anyone.  Feel free to say fuck as much as you want around us, I'm mothertrucking cool with it.

Toys for tots part one

Buying toys for babies and toddlers is tricky.  Some people have said that babies don't need toys, just give them a paper towel rolls and empty cartons!  I have no doubt that works for some kids but not for Sophie.  If you give her anything paper she will joyfully eat it despite all the nasty paper chemicals therein.  I believe in taking kids outside and on outings most days but in between breakfast and nap time or on rainy days toys are important.  Toddlers and babies can't tell you what they want to play with.  Like most parents I want to invest in toys that are going to help Sophie learn and develop not just things to keep her occupied all day.  I have not always been successful in my toy buying ventures.  There are some things that sadly never saw any play.  But here are some things that have been a hit at our house. 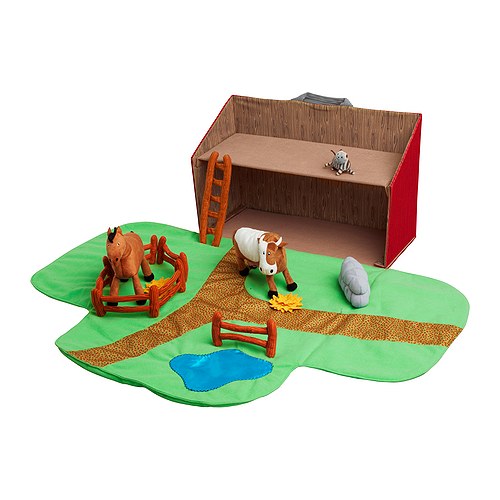 Sophie loves this.  It's the first thing she goes to play with every morning.  H picked it out the last time we were at Ikea.  I probably would have thought it was too expensive, €20 for the farm plus another €10 for the rest of the animals.
Her favorite animal is the cat, which she carries around petting while cooing the German interjection for petting animals.   Could anything be cuter?  She will tell you that the cow goes 'moo' and the sheep says 'baaa'.  It's also something I can see her playing with as she gets older. 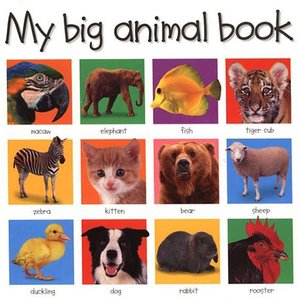 I have read this so many times.  So many.  As you can tell animals are a big hit at our house.  I think it's a stage most children go through. 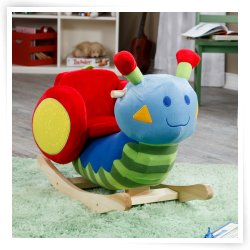 We got this for Sophie's fist birthday but she didn't start playing with it until she learned to walk properly.  Since then we named him Charlie and he always makes her smile.  He plays Mozart and has a compartment in his shell where we like to keep toys.  Sometimes she just plays the music and then dances around the snail petting his head.  That's ok too. 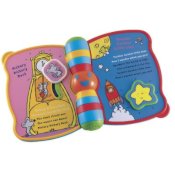 Sophie is into music so I got her the German version of this singing nursery rhyme book.  It's small which is great for travel and keeping her occupied in a hotel room, airplane or bus. 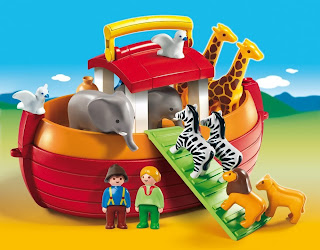 Something about Noah's ark appeals to children.  Maybe because the animals are in pairs?  And they're on a boat?  Who knows.  I had to do a little bit of searching for a Noah's ark toy that was suitable for children aged under three.  Which is why I went with the plastic version instead of the slightly prettier wooden ones.  I'm glad I did because Sophie is teething and the last thing I want is the ingestion of wood and paint.  This is her second favorite toy after the Ikea farm.  She plays with it every day.  I also like that Emzara doesn't look like a pilgrim.

5. Horns to Toes and In Between 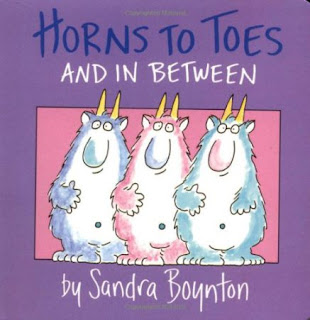 This book is so cute.  How could you not love rhymes about big furry monsters and their body parts?  Now that Sophie knows a lot of these words she will grab her nose when we read about noses and etc..  Love.

This last one is cheating because while Sophie likes it I'm adding it because it's my favorite board book.  I like it so much I ordered two more by the same author.  Hands down quiet possibly the best bedtime book ever written.  I never get tired of reading it to her.
The end.
Posted by Sara at Monday, September 09, 2013 No comments:

I have been avoiding thinking about this last business trip H is taking before starting his new job in Berlin.  He's going to be gone for three weeks.  Three!  Blah, lets not talk about it, yeah?  I like to distract myself with difficult tasks, like buying a new handbag.  I came this close to buying a wine colored Courtney hobo but the customer service people for coach.com are a nightmare.  When it looked very likely that a new bag wasn't going to be delivered in time for my mom's flight today I canceled it.  I'm glad I did too because I think I found something better at Zara for a fifth of the price.  I love the burgundy and cognac leather that's everywhere this year.   It's too bad my husband hates leopard print because I really, really love leopard print flats as well.
Today when we woke up it was pouring rain and in the 50s.  I have a feeling that Fall might already be here.  The changing weather doesn't mean I'm buying all new stuff though.  Some of H's economical habits have rubbed off on me over the years.  Like this year we actually got around to listing some clothing on ebay.  I was surprised by how well used clothing sells, especially brands typically marketed to teenagers.  What's up with that?

Speaking of teenagers, I can't quit American Eagle jeans.  No matter how many other pairs I try I can't find any that fit my body type as well or are as comfortable.  My mom dream came true and they made a high rise skinny jean.  Not having to pull up my jeans x times a day is heaven.  Seriously, $30 for a pair of cute jeans?  I'm going to be wearing them until I'm 50.

Some other economical decisions were to get a pair of ankle boots resoled.  If I find a pair of boots I like then I keep them forever.  I love Zara boots and my black pair are on their second soles but other than that they look as good as new.

The cold means more cooking.  I got a few pounds of chickpeas and lentils on sale.  I'm planning on practicing some new recipes.  That's not very exciting, I'm sorry.  Maybe I will learn how to make a roast and my husband will be impressed.  How hard can it be?  Don't you just put the huge piece of beef in the oven?  I don't know, not into roasting anything other than vegetables. 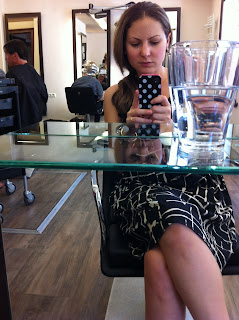 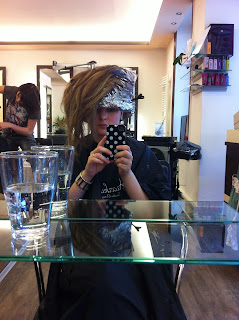 I went sort of blonde, or as blonde as I could considering I have naturally brown hair.  I was at the salon for three hours getting it bleached, hence the selfies above.  It was not fun but at least my hair isn't in a state of disaster any longer.
Posted by Sara at Monday, September 09, 2013 4 comments: