Do Europeans parent better than Americans?

I have a lot of thoughts on cross cultural parenting and what kind of parenting cultures are better.  But in order to talk about parenting I have to go into the cultural context first.  I apologize in advance if this post is somewhat muddled because these ideas are wrapped up in other ideas I have about European culture as a whole.

There are in existence a lot of parenting books.  Some of which might suggest that the French (or Europeans in general) parent better than Americans.  This is an idea that's been floating around on the Internet for years. Almost every blogger whose blog I read has touched on this once.  They almost always universally agree with it.  Even the American parents insist that they were raised as children or are raising their kids 'European'.  This makes the wannabe sociologist in me give a sad little sigh.  I think the idea that Europeans parent better comes from this idea Americans have that Europe is culturally superior to America.   While I understand the romanticized concept of Europe I don't always think that plays out in reality.

I haven't raised children in America.  I only vaguely know about American parenting culture from my own upbringing and the few people I know that have children in the US.  The American kids I know are great.  They are polite, well behaved, healthy and really well dressed.  They have set mealtimes, don't constantly interrupt their parents or ruin their lives.  I have never met the mythical American child tyrant who demands to be fed chicken nuggets and throws so many tantrums that the parents can never go anywhere without a babysitter.  I'm sure bratty children exists in the US but in my experience they are not the typical child.  Out of the ten or so children I babysat for back in the 1990s I only remember one family that had children who misbehaved.

Bratty, misbehaving children can be found in Germany as well.  Like the US they are the exception and not the majority.  People are going to pay attention to the one child throwing a tantrum much more than the ten that aren't.  As an English teacher I worked in kindergartens, taught private lessons and groups lessons.  Most of the children were really sweet and a pleasure to work with.  The kids I had problems with were nightmares that I attributed solely to the parenting choices of their primary caregivers, not their German culture.

If you don't have children it might blow your mind to find out that all kids throw tantrums, push boundaries, wake during the night and all babies cry!   All of them!  Even the French!  Buried deep in the article on why French parenting is better is their secret for getting babies to sleep through the night-

'It is why the French babies I meet mostly sleep through the night from two or three months old. Their parents don't pick them up the second they start crying, allowing the babies to learn how to fall back asleep.'

I'm not quiet sure how to convey my disappointment through the written word but REALLY!!!??? That is it?  That's the trick?  We have that in the US but instead of 'teaching babies patience' we call it 'controled comforting'.  It's a well known sleep training method that isn't particularly French at all.  In Germany most babies sleep in a crib in their parent's room for the first year.  Sophie's pediatrician would have been mortified if I'd refused to get up in the middle of the night and feed a crying two month old.  Pediatricians in the US don't recommend sleep training until babies are six months old.  The general consensus being that young babies needs to eat every two-four hours.   Ignoring a two month old that is hungry or thirsty in the middle of the night isn't going to kill them but it doesn't sound like a very nice thing to do.

As an American living in a European country I probably parent differently than Americans living in America.  Germany gives parents incentives that take the financial stress out of having a baby.  They also provide states subsidized kindergarten starting at 18 months.  It's possible we enjoy parenting more because of the child friendly German culture.   That doesn't mean I'd want to raise Sophie as a German.

I feel like our shared American culture is important for developing creativity, individuality and flexibility.  These are qualities that I admire in Americans but have found to be somewhat lacking in Germans.  On the other hand it would be nice if Americans didn't feel so divorced from society, cared more about soical issues and the environment.

While I can't say if Europeans parent better, I think all cultures have strengths and weaknesses when it comes to parenting.  I don't believe you can set one culture, like say the French, above Americans or Germans and say 'ahhh, yes, these people have figured it out.  They are the perfect parents.'  Of course not.  American parenting produces American children and French parenting produces French children and the world is a better place with both in it.  We can learn from each other but it's probably not a good idea to say that one is better than the other.

Flats for feet that walk

Since getting pregnant and having Sophie I've only been wearing two pairs of shoes.  A pair of black Zara boots and a pair of black H&M flats one size too big.  Two pairs of shoes for two years.  I wasn't interested in shoes because my feet were swollen and then I had lots of weight to lose.  I wouldn't wear heels because I was afraid of stumbling and dropping Sophie.  She's getting older and I'm really bored with my two pairs of shoes so it's time to branch out.  My first quest was a comfortable pair of flats. 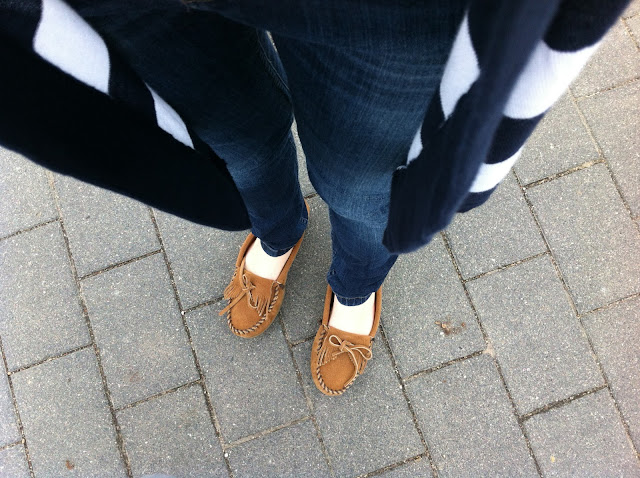 These Minnetonka moccasins are my winners.   I tried a pair of Minnetonka slippers over the holidays and didn't like them.  I was willing to give the brand another chance and ordered these moccasins from Piperlime. Flats always hurt my feet or don't offer enough foot support.  These are so super comfortable!  They are really casual.  That's ok since I don't work or go anywhere fancy.  They match almost everything too.

Today I pushed a stroller for five k and my feet were happy.  It was the first day of Spring when we didn't need jackets or socks. 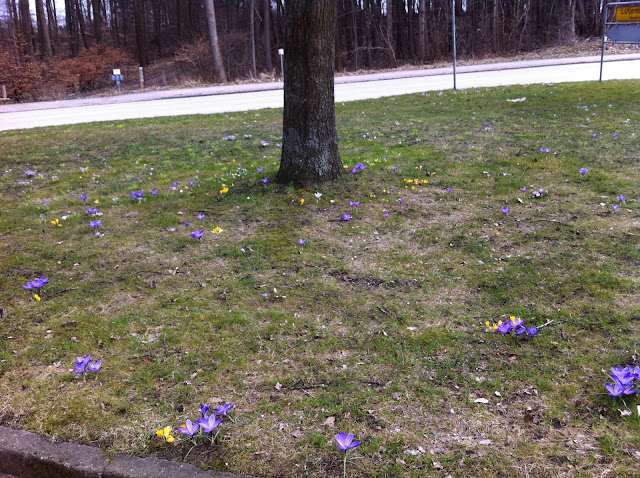 I took my new shoes to the wild animal park in Malente.  It was a nice little hike. Redgie got some exercise and barked at the warthogs.  Sophie wasn't too impressed with them.

H helped me figured out how to adjust Sophie's stroller.  Can you believe it was still on the settings we were using when she was four and a half months old?  I was so frustrated that the straps were too short and she wasn't sitting up straight.  Poor little girl must have been so uncomfortable.

I pulled my Ugly Cowgirl Boots out of storage for the colder days.  Wooden heals are so loud, I get stares wherever I go.  Maybe I should trade them in for some ankle boots?  Ankle boots are everywhere these days. 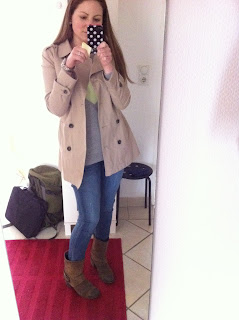 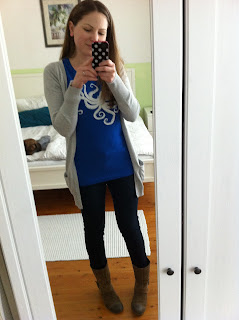 Oh Germany, sometimes you make me want to scream and maybe throw rocks.  Which would probably make me look like an mad chimpanzee but whatever.

Yesterday a young man almost hit me with his shiny black Mini Cooper.  For the record, traffic merging onto the Autobahn has to yield.  Rather than yield, he floored it and would have sideswiped me or run out of lane and crashed.  I am not willing to risk an accident so I did the responsible thing any defensive driver would do and slammed on my brakes.  I'm grateful that Sophie wasn't in the car with me or I would have lost my mind.

I was on my way to Lübeck to return some jeans to Zara.  My latest method of buying jeans is to order several pairs in different sizes online, try them on at home and then return the ones I don't like.  It might sound tedious but it's easier than taking Sophie to the store.  She has something against jeans shopping.  I ended up choosing low rise ankle jeans by default.  They weren't what I was looking for but I always end up getting suckered into buying something more on trend than what I would normally buy.  They are kind of cute, right?

I was also in Lübeck to hunt down my Redken deep conditioner.  It used to be that I could buy Redken almost anywhere but lately several of the places I used to buy it closed down.  This sent me on a two week, three city hunt for conditioner.  Seriously.  I've been to Hamburg, Kiel, and lastly Lübeck but no Redken.   I should have given up sooner and ordered it online.  That would have been the easy thing but I didn't think of it.  When I finally did my online search I found out that Redken has discontinued their Smooth Down Butter Treat.  Nooooooo!

This stuff is the best for curly hair and I've been using it for years!  I found some on Amazon.de and ended up ordering a two year supply.  Is that crazy?  I feel like it might be a little overboard but H was ok with it.  I've also bought a year's worth of day and night cream.  Maybe I should stop doing that

It was a beautiful day in Lübeck but I was feeling grumpy.  I still have the remnants of the horrible awful nasty ear infection.  Maybe that's why everyone I interacted with seemed terribly rude.  It could have been me though, I wasn't feeling very friendly. 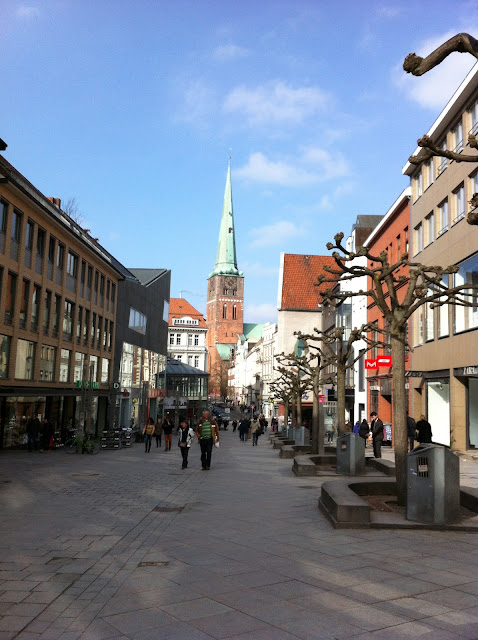 Lately I have been missing the strangest things from the US.  Like warm weather and watermelon and Dairy Queen and chocolate syrup on ice cream.  The last two things have manifested themselves in an overwhelming craving for McFlurries.  I'm ashamed to admit it, but I think I would eat a McFlurry every day if I could.  I hear that Spring has arrived in New York, can you believe that?  You wouldn't believe me if  I said I wasn't jealous.
Posted by Sara at Saturday, April 13, 2013 5 comments: