This post is such a long time in coming you guys.

Most Americans don't have access to public transportation.  A drivers license is cheap and necessary so we take driving for granted.  In Germany the culture of driving is completely different.  Drivers licenses are expensive and there is an abundance of public transportation.  Having a car is a status symbol.  It's not just about getting from point A to point B.  A German's car is a reflection of who they are and they drive accordingly.

Four out of the five years I've lived in Germany I've had a car.  As an English teacher I taught classes all over Hamburg and in the surrounding areas.  That translates in a lot of driving.  Sometimes as many as three hours of commuting in a single day.  I've been in multiple car accidents (none were my fault) and I have some opinions about German drivers.

For one thing, driving culture in Germany is strongly effected by region.  Berlin drivers are way more chilled out and low key than Hamburg drivers.  Berlin drivers will let you merge as soon as they see your turn signal but Hamburg drivers see a turn signal as a sign to close ranks so you have no chance of merging. This post is about driving in and around Hamburg.  I can't say if all Germans are like this.  I know all the license plates of the regions around Hamburg and I can rank them from the worst drivers to the best.

There is an extremely sexist nationally held opinion that women aren't good drivers.  I can you from experience that this is untrue.  All of the dangerous behaviors I'm going to talk about are always done by male drivers.   Not all German guys are bad drivers either.  H is a great driver and he is never aggressive and always follows the speed limit.  But there are enough guys on the road who seem to think that they are starring in a overseas reboot of The Fast and the Furious to ensure that any time I get behind the wheel one of the following things is going to happen.

1. Tailgating-  Some Germans tailgate just to be assholes but most of the time they tailgate to let you know you are driving too slow.  Especially if you are, like, driving the speed limit.  The speed limit is too slow.  The German on your ass wants you to know that he is in a hurry and you'd better speed up before he crashes into your bumper.  A lot of times tailgating happens in heavy traffic when it's impossible to speed up or get out of the way.   If you don't have pet or children in the car you can break fast, this usually scares the Scheiße out of the tailgater and makes them stop.

2. Flashing brights- On the Autobahn Germans flash their brights as a way to say 'move over' or 'get out of the way' when they are driving much faster than passing traffic in the left lane.  That's totally cool.  But there is always some guy who will tailgate and flash his brights at the same time as a way to harass a driver who can't move out of the way either because of traffic or a passing truck or road construction or some other perfectly legitimate reason.  Semi trucks will also tailgate and flash their brights at cars driving the speed limit when the truck doesn't want to pass.

3. Being first- In the city it's always a race to the next stoplight and the dude driving the white Audi wants to be first because winning makes him feel good.   Cars will pass on the right, cut you off, speed, tailgate,  whatever it takes as long as they are the first person to stop at the next red light.  Sure it's annoying but remember, you are not just driving to work.  You're an extra in some guy's race car movie fantasy.

4. The pecking order- Germans really love their cars.   While most Americans show off by buying big ass houses Germans show off by buying nice cars.  They love their Audis, Mercedes, and BMWs.  If someone is driving a nice car they probably feel entitled to the right of way because their nice car means they're better than you.  I have a burning hatred for white Audis because I've been cut off by so many of them that I've come to the conclusion that only assholes drive them.  Germans joke that buying a BMW means having a built in right of way.  The resent emergence of the luxury SUV as a status symbol has added a new layer to the pecking order.  Beware of anyone driving a luxury SUV, especially if they are playing loud music with the windows rolled down.

When I was an English teacher one of the phrasal verbs I often taught was 'good at'.  I can't tell you the number of middle aged German men who when asked to say what they were 'good at' would say something like 'driving fast in bad weather' or some other asinine example that made me use all my concentration not to roll my eyes so hard they'd fall out of my head.

Every guy in Germany with a car thinks he's a great driver.  That's a good thing to keep in mind if you are ever planning on getting a car here.

And as for the Autobahn, it's not really a big deal that there is no speed limit.  Gas is so expensive that most people can't afford to drive much faster than 160 km an hour.

Email ThisBlogThis!Share to TwitterShare to FacebookShare to Pinterest
Labels: driving in Germany

By Zara of course. 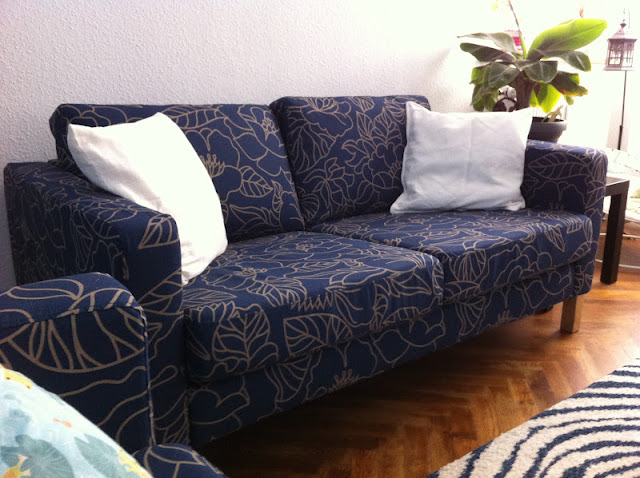 Right now I am sitting in my living room pondering the new sofa covers.  Do they look right?  Are those pillows too light?  How is it that after months of painstaking making my living room perfect on a miniscule budget H suddenly gets it into his head that he'd rather buy new sofa covers instead of washing the white ones?  I spent months agonizing over my living room and now this.  Hmmm.  I'm going to miss the white couch but in three months Sophie will start eating solid foods.  Do you think a white sofa could survive that?  Or a toddler?  And a drooling dog?  Probably not.

Then there is this trip to Prague.  We were going on the trip, then we weren't and now we are again.  Maybe.  Except some people do not want to be in the car for more than four hours at a time which means it will take two days to get to Prague and two days to get back.  That's a lot of travel days.  Maybe it's ok because we could spend two days in Berlin and I like Berlin?  It's times like this that I wish I was under a cloud that rained money.  How else am I going to afford three vacations in a six month time period?  And yes, I know how that sounds but these three vacations are all very important to me.  One is going to Prague with my parents, one is going home for Christmas for the first time in two years (!) and one is a long overdue family vacation after H gets back from his four month long business trip.  The Prague trip is the least important and therefore the most likely to get axed.  (sorry Mom)

All I've wanted to do all week is pour bath salts into my giant bath tub, get a glass of wine and soak soak soak while I read the last book in the hunger game trilogy.  Talk about lazy.  I can't let go of the feeling that this is probably the last chance I'll get to do absolutely nothing until next year.

At the ages of 30 H and I finally got a set of matching dishes and flatware.  I consider it our five year wedding anniversary gift to each other.  We've been together for seven years.  That's a long time right?  I know it's good stuff because H left a plate on the arm of the sofa and, of course, I knocked it over but it didn't break. 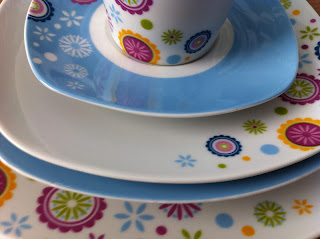 These dishes need to be tough if they are going to survive us.


Oh yeah, remember those beautiful orchids I bought?  I might have forgotten about them and they might have died.  No more house plants for me.
Posted by Sara at Tuesday, August 07, 2012 No comments: