The weather is warming up, it's starting to look like spring.  Zara has every coat you ever dreamed of for warmer weather.  So many choices, how can you pick only one?

I've been married for 8 (!) years and known my husband for 11.  Needless to say, Germany has changed me a lot.  I've adopted a lot of husband's German attitudes and habits. One of the best habits I've picked up is German thriftiness.

This topic gives me an excuse to post this picture H took when I still a student at NIU.  It was 2006 and we went to Florida for spring break.  I was so not thrifty back then.  I also apparently didn't wear sunglasses which is why I'm squinting.

In Germany banks just don't hand out loans and credit cards like they do in the USA.  A lot of Germans don't have credit cards and prefer to pay cash or use bank transfers.  You have to prove that you can pay for things before you get a line of credit.  Every time I tried to get a car loan in Germany I was always denied because I worked as a freelancer.   We ended up saving the money and then paying cash for my first tiny little black Smart For2.  It was the first time in my life I couldn't get a loan.

My spouse has a credit card but he always pays off the balance at the end of the month.  He's insured for everything you can get insurance for and he even opened a retirement fund for me a few months after we got married.  He doesn't like to buy things, or anything for that matter, which sometimes clashes with my American materialism.  He's also really into recycling and saving stuff like energy, water and gas.  Everything in our home is energy efficient, water efficient and whatever can be recycled is.  H is responsible if he is anything.  It turns out that after living with him for a third of my life some of these awesome traits kind of rubbed off.   Here's some of the ways I have changed.

Food is one of the biggest areas of waste in the USA.  Americans throw out hundreds of millions of tons of food every year.  I used to be really bad at this.  I would make a bag of popcorn, eat half and then throw the rest in the trash.  I would buy too many groceries and let things go bad.  You would have thought as a poor student I'd have been wiser, but I was terrible at food economy.

Now that I've had some years running a household food waste drives me crazy.  Groceries aren't as expensive in Germany as they are in the USA but they still take up some of our monthly budget.  Why waste money by wasting food?  It's almost become a principle of social responsibility these days.

Of course, we still waste some food but not nearly as much as before.  These days I always know what we need and how much without much effort or planning.  On a normal day I know if we need eggs or if we still have a carton in the fridge.  I keep a list in my phone that way if I find myself at the store I know exactly what to get.

I use kitchen hacks like keeping staples on hand and doing food prep for the week on Sunday nights.  At least once a month I buy a whole chicken so I can make stock.  I hadn't realized how easy making things at home is because I was used to buying everything ready made in the US.  When we make big batches of stuff like homemade pizza, pasta, lentils, or soup we freeze half but try to eat those leftovers on busy nights when we don't feel like cooking.  You might think this wouldn't work because freezers are small in Germany, so far it hasn't been an issue.  As long as we eat what's in the freezer within a couple of weeks we don't run out of room.  We almost never have to eat something out of bag or a can. And now if I have a bag of microwave popcorn I share it with someone.  It's so hard to find in Germany to begin with I would never throw it away.

Keep utilities costs to a minimum

As an American I didn't think utilities costs that much.  I was pretty careless about leaving electronics running or turning off the lights.  Now I am super careful.  I have a dryer but I almost never use it, especially during the summer.  I have a routine that works with the laundry so that everything gets washed, dried, ironed and put away by Monday with little fuss.

We don't have any lights or electronics that aren't energy saving.  A lot of our lights are LEDs.  Our apartment is on the bigger side but it's divided into two parts, with the bedrooms in the front and the living room, dinning area and kitchen in the back.  We usually don't heat the bedrooms because we sleep with out windows open at night, even in winter.  The apartment is designed so they are the most insulated rooms and don't get very cold anyway.

Usually we end up overpaying utility costs which means we get a refund at the end of the year and a couple of times our rent has been lowered.  Another plus is all these habits are great for the environment.

When I was home last Summer I bought a designer sweater (on sale).  It was one of my favorite things in the world and I loved it to death.  I wore it almost every week for months.  Of course, one day it got a little hole in it.  I was totally bummed because it hasn't lasted a year.  But instead of throwing it away I decided to fix it.  I read a quick DIY on darning, cobbled together some supplies form our meager sewing kit and voila! 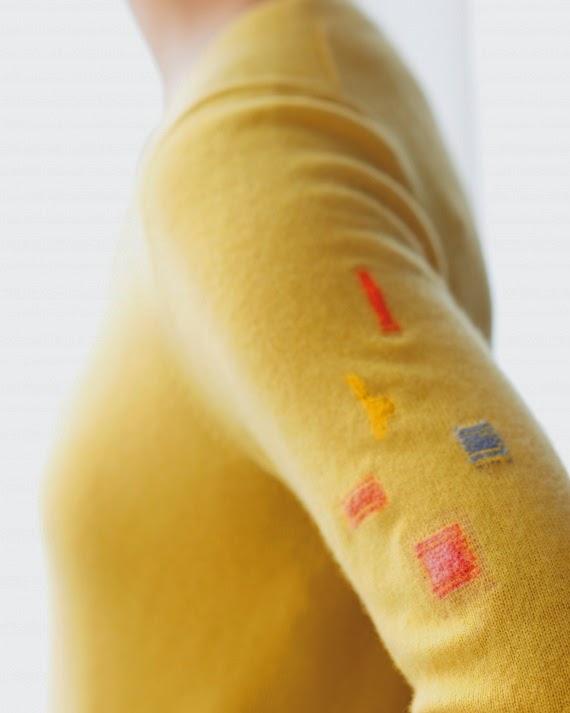 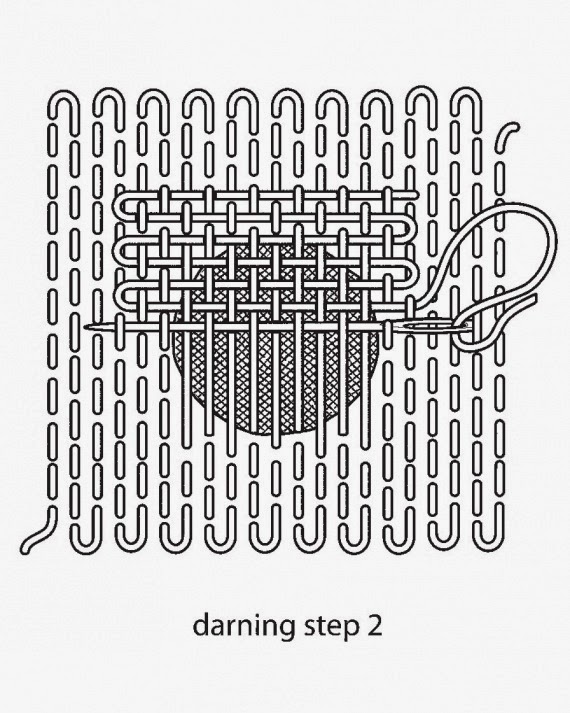 I was able to fix the hole.  Months later I still wear my favorite sweater all the time.  You can't tell I mended it myself.  I'm not a very crafty person and I haven't touched a sewing machine since home economics in 7th grade.  Darning is really not that hard at all.

Another great fix is getting high quality shoes resoled instead of throwing them away.  I never buy cheap shoes anymore and I always make sure they're made of leather.  I've had my favorite pair of Zara boots for four years and I've had them resoled twice.  Resoling shoes makes them last two or three times as long.  When it come to wardrobe basics, like black pumps or riding boots, buying a new pair that looks almost identical every year doesn't make sense.  Good quality boots can cost from €100-€200 in Germany, getting them resoled is about €20.

Of course missing buttons or ripped seams are never a reason to throw something away.  Those are super easy fixes anyone can make.  If a piece of clothing isn't cut the way I like I take it to a tailor.  This is super cheap, most alterations cost around €10.  One of my favorite dresses was a too long maxi, I took it to a tailor and had it made into a midi.  The length is more flattering and I get a ton of compliments on it every summer.

Minimize your little costs and fees

When I lived in the US everything was always about convenience.  I didn't care if I had to pay a dollar to get cash from the ATM as long as it was easy.  As a result I spent hundreds of dollars every year paying little fees I could have avoided.

Drive or take the train?  Spend €2 on a soda or bring a water bottle?  Pay an ATM fee or get cash for free?  Buy a sandwich or bring your own?  There are a bunch of tiny costs every month that can be eliminated.  I always think twice about what I'm spending and why.  If there isn't a really good reason to drive I take the train.  I try not to pick up expensive drinks or snacks when I'm out.  We haven't paid an ATM or money transfer fee in years.

Sometimes paying more is worth it

There are some things we pay a lot more for in Germany.  I buy Cheerios from amazon.de even though they are five times more than a box of sugary cereal from the grocery store down the street.  My husband likes high quality chocolate and we order wine from a vineyard a couple times a year.  We always get bread from the bakery and meat from the butcher.  I don't mind footing the bill to get my cut and highlighted at an expensive salon in Berlin because it save me the time and money of running around getting bad highlights fixed.  Remember the orange hair debacle?   I could have spent the weekend in Istanbul with the money I paid to get my orange hair fixed.  Sometimes we have date lunches on Fridays while Sophie is in Kita at the fancy Italian restaurant in our town.  And last year I bought Sophie big colorful building bricks from America even though the shipping was crazy because it was a toy all the kids I knew back home totally loved.

So sure, we try not to be wasteful people but we're not living like Spartans.  It's all about balance.

I still have a long way to go

I've come a long way form my materialistic American roots but I still have a long way to go.  I'd love to say I never spend money on clothes I don't need but that's just not true.  I guess a lot of things rub off but my love for shopping is too deeply ingrained to go away so easily.  Oh well, maybe after another ten years of living with H and I'll hate shopping just as much as he does.